Last month we left Durban in the early hours of the morning to document one of the largest Rhino dehorning operations in KwaZulu-Natal.

We arrived at Spioenkop Nature Reserve just as the mist was rising off Spioenkop Dam, a perfect start before joining Ezemvelo KZN Wildlife and Wildlife ACT, in dehorning the entire population of white rhino on the Reserve. 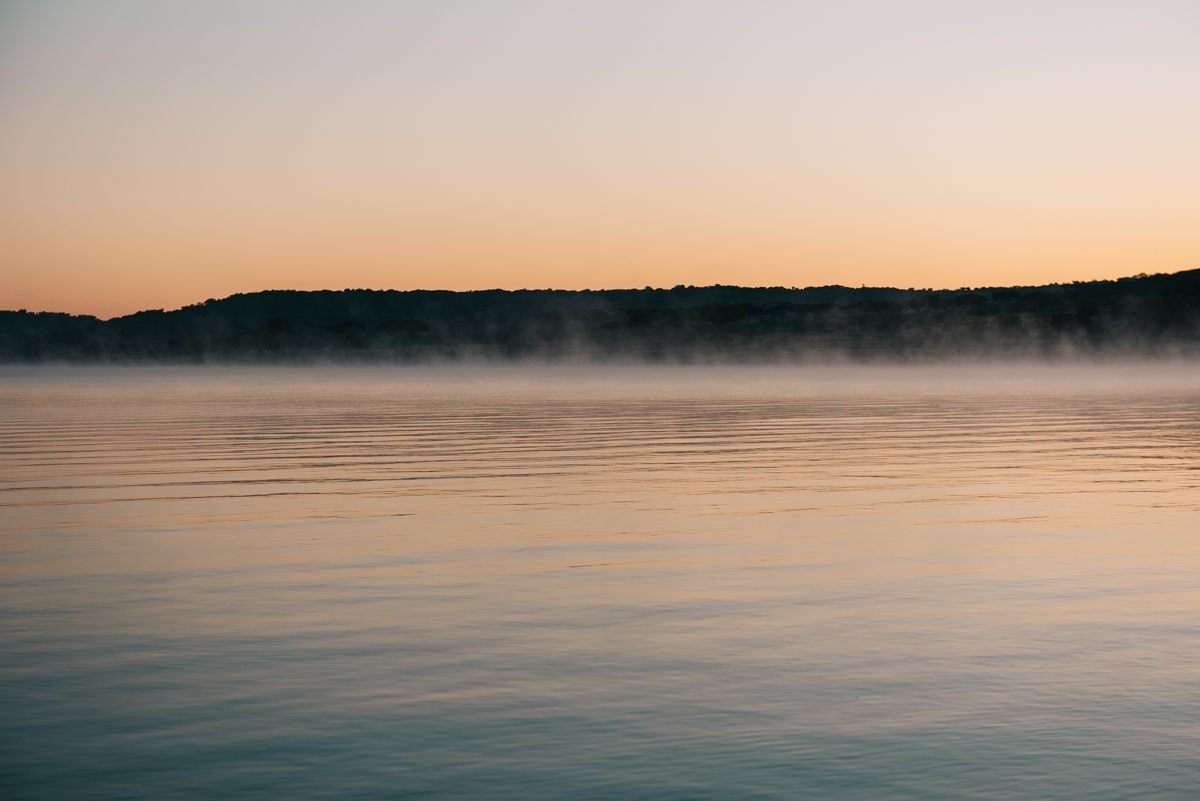 South Africa has the largest population of white rhinos in Africa. Unfortunately due to the continuous onslaught of rhino poaching, the dehorning of rhino populations has been adopted as an effective tool in the fight to save the species from this increasing threat. Although not a solution on its own, dehorning has proven effective when used in small populations and in conjunction with a number of other initiatives, including strong law enforcement.

We were there to document the first day of a three-day operation – the pressure was on to capture what we could in a few hours.

We knew we would be lucky to witness one or two dehornings but we never anticipated watching these incredibly effective teams successfully dart and dehorn a large number of individuals in a single day. 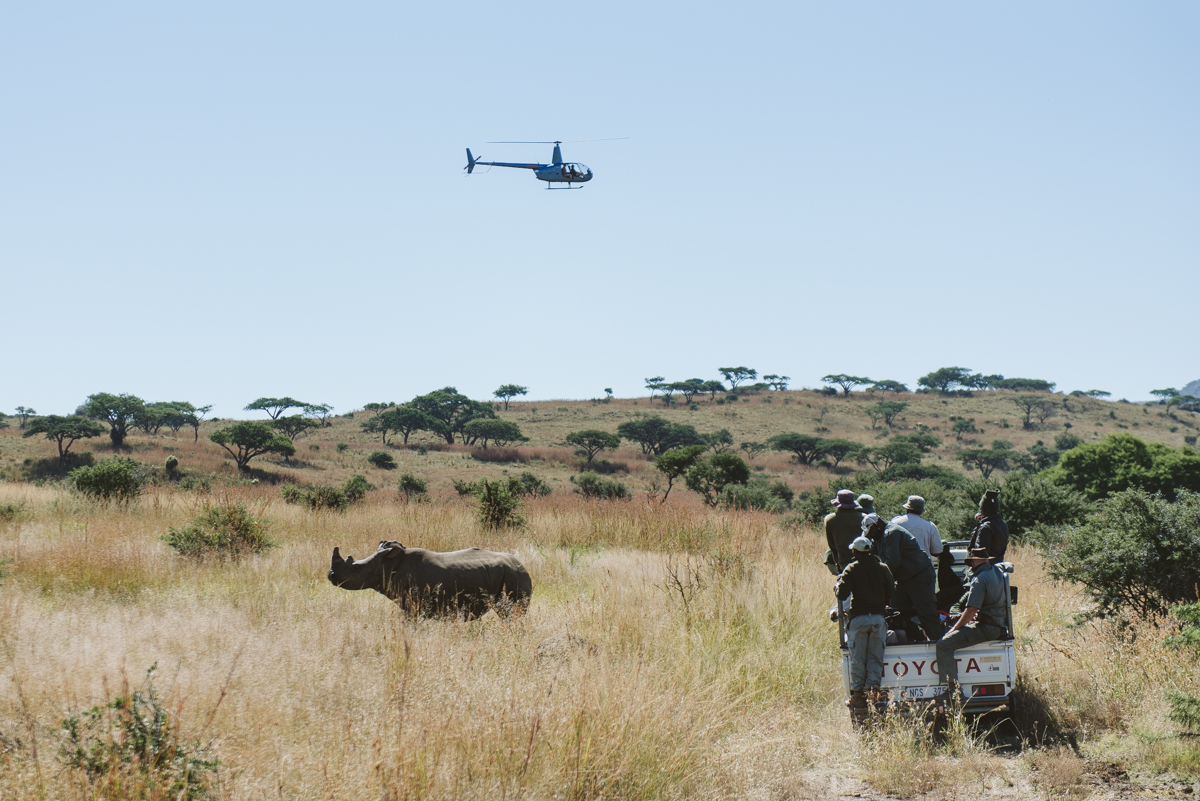 Dehorning Rhino is a large-scale operation involving experienced ground teams, wildlife veterinarians and highly skilled helicopter pilots who are able to manoeuvre these animals into areas that are easily accessible for the teams.

“A true privilege to watch, I don’t think one can comprehend the level of skill needed until you’ve seen it for yourself. The rhino’s well being is at the centre of every decision made and the team’s extreme efficiency in the dehorning process ensures that the animal is put under as little stress as possible. ” – Casey Pratt, Love Africa Photographer 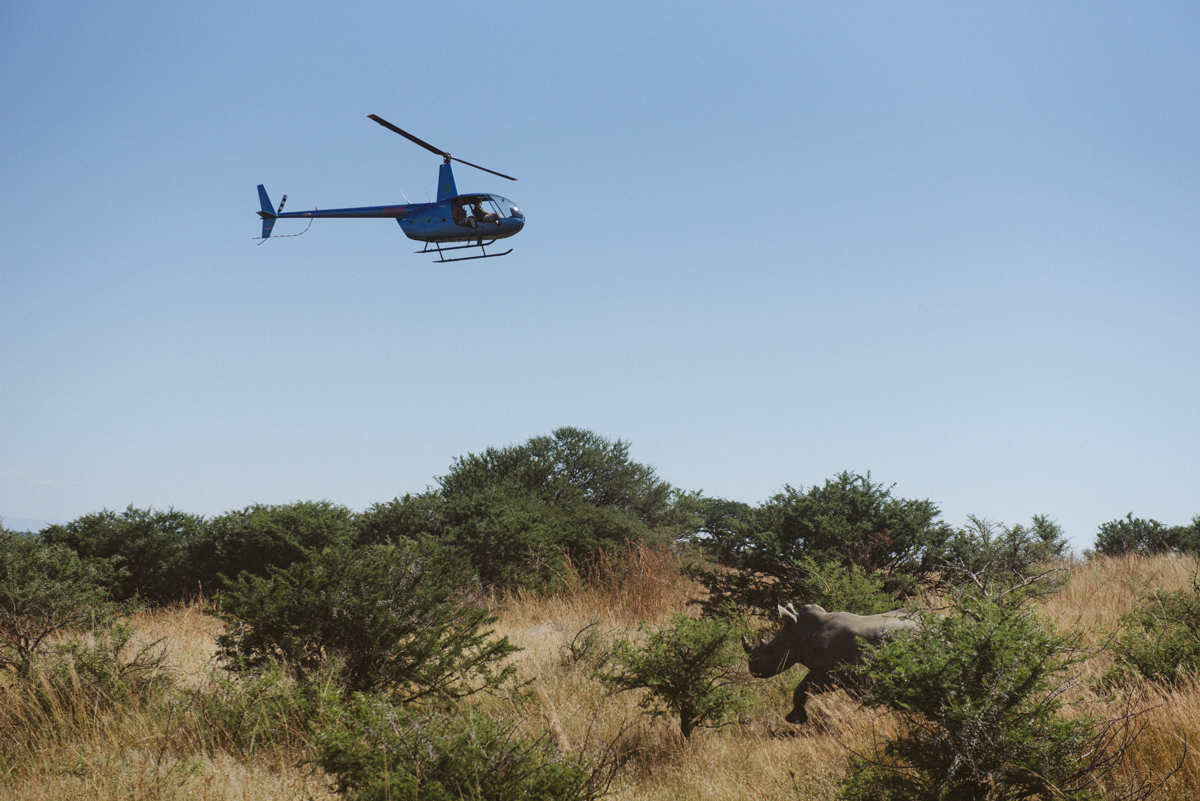 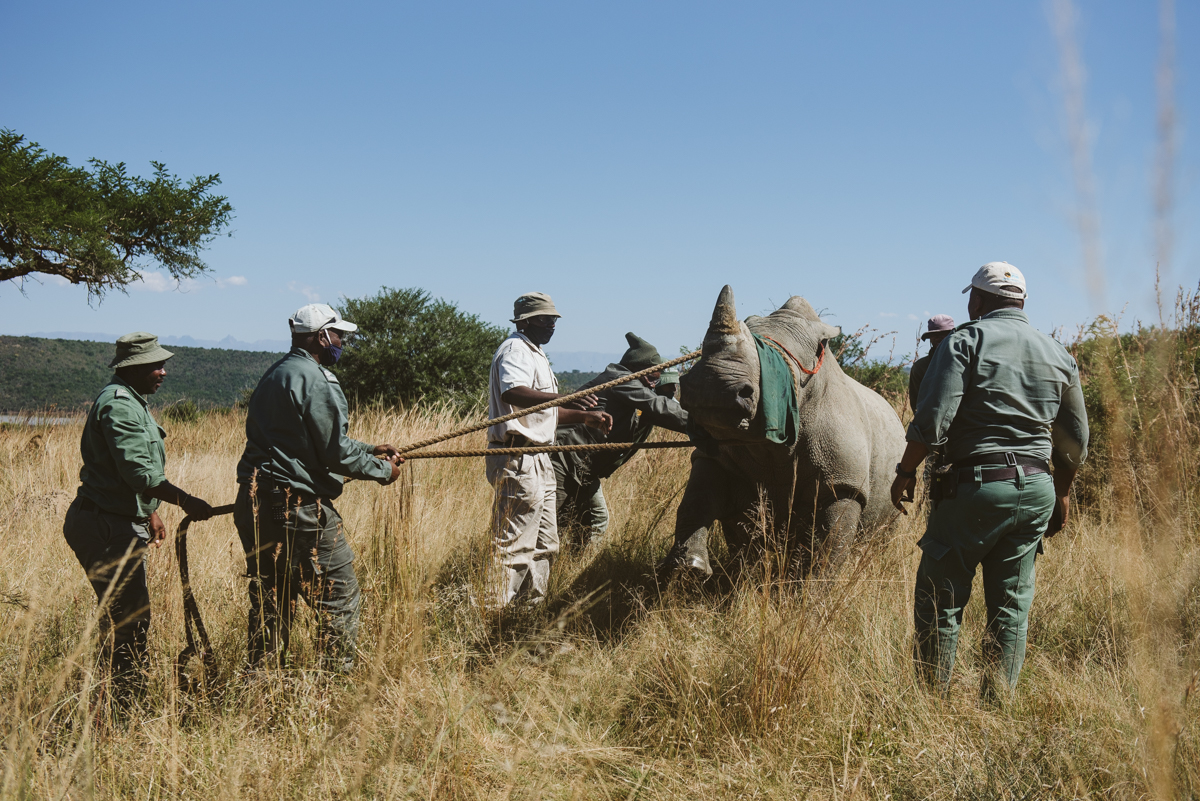 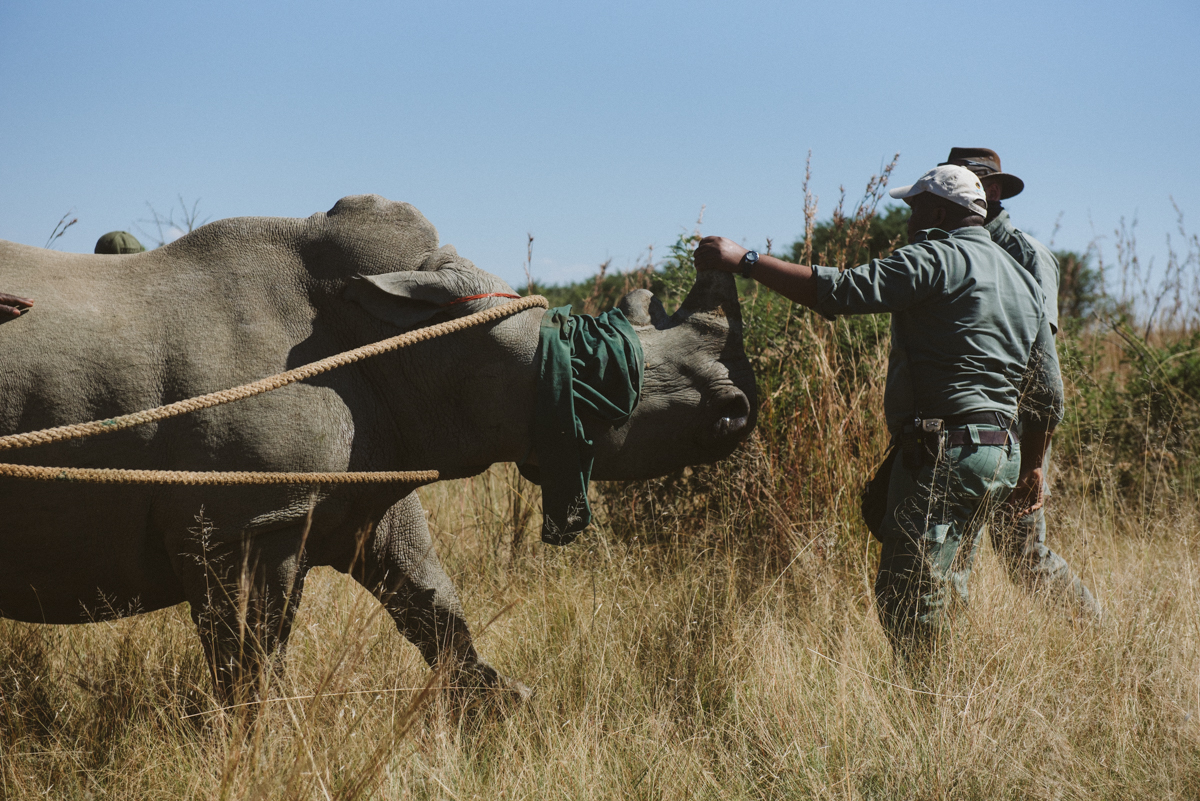 The Ezemvelo Game Capture team and Wildlife ACT worked in collaboration to successfully dart and dehorn the entire population over the three-day operation. The team also notched the ears of several young rhino that were dehorned for the first time. Notching allows for an individual rhino to be easily identified by monitoring and field ranger teams in the reserve, thus ensuring effective management of the population. 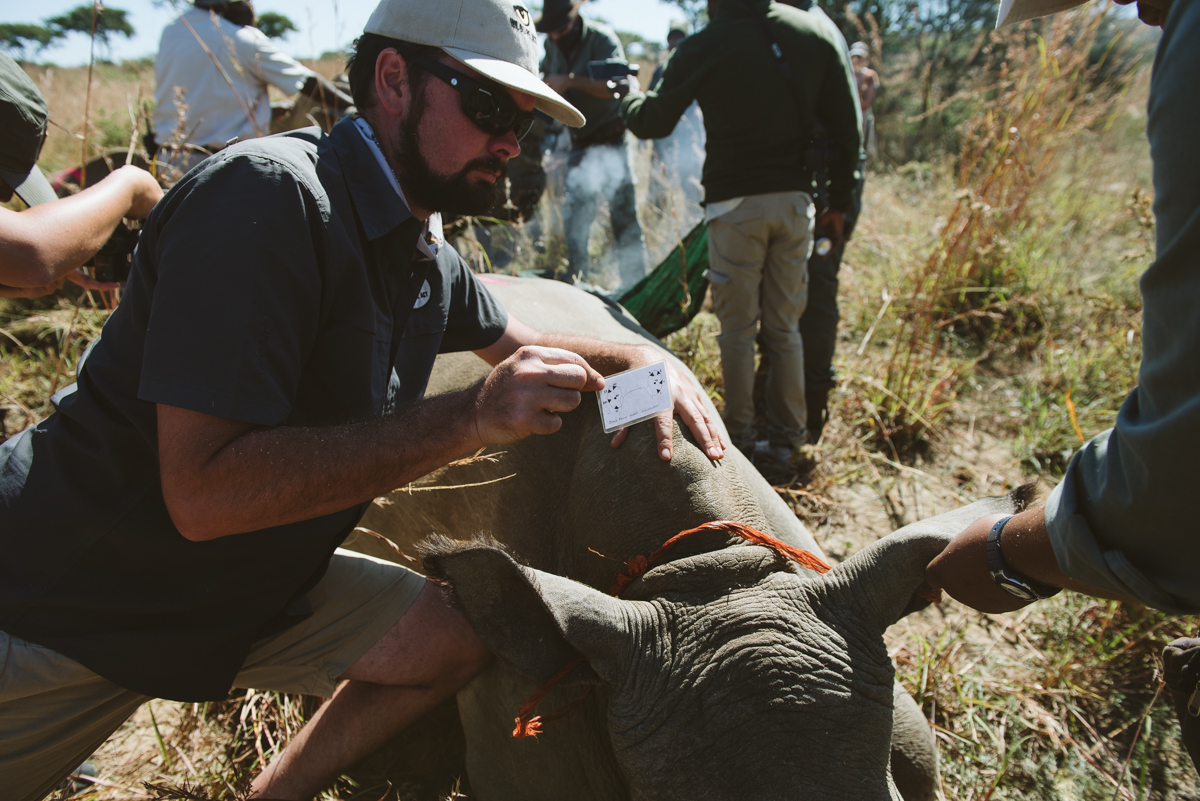 ‘Feeling the sting of flying keratin hitting me in the face as I tried to capture the action brought about such mixed emotions. While it is totally painless, it was harder to watch than I thought it would be. You know this process is in the rhino’s best interest, but it’s hard to fathom that this whole operation needs to take place to protect them from mankind. These iconic animals deserve more. ’ – Casey Pratt, Love Africa Photographer 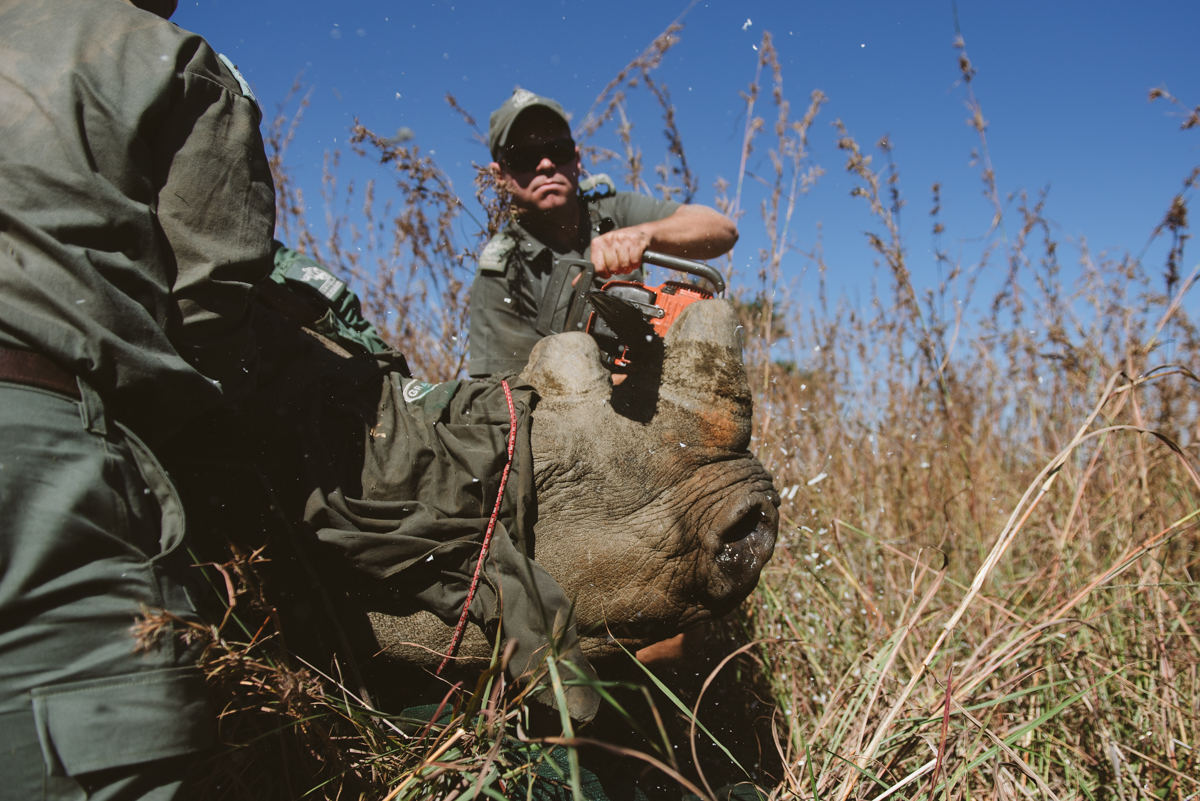 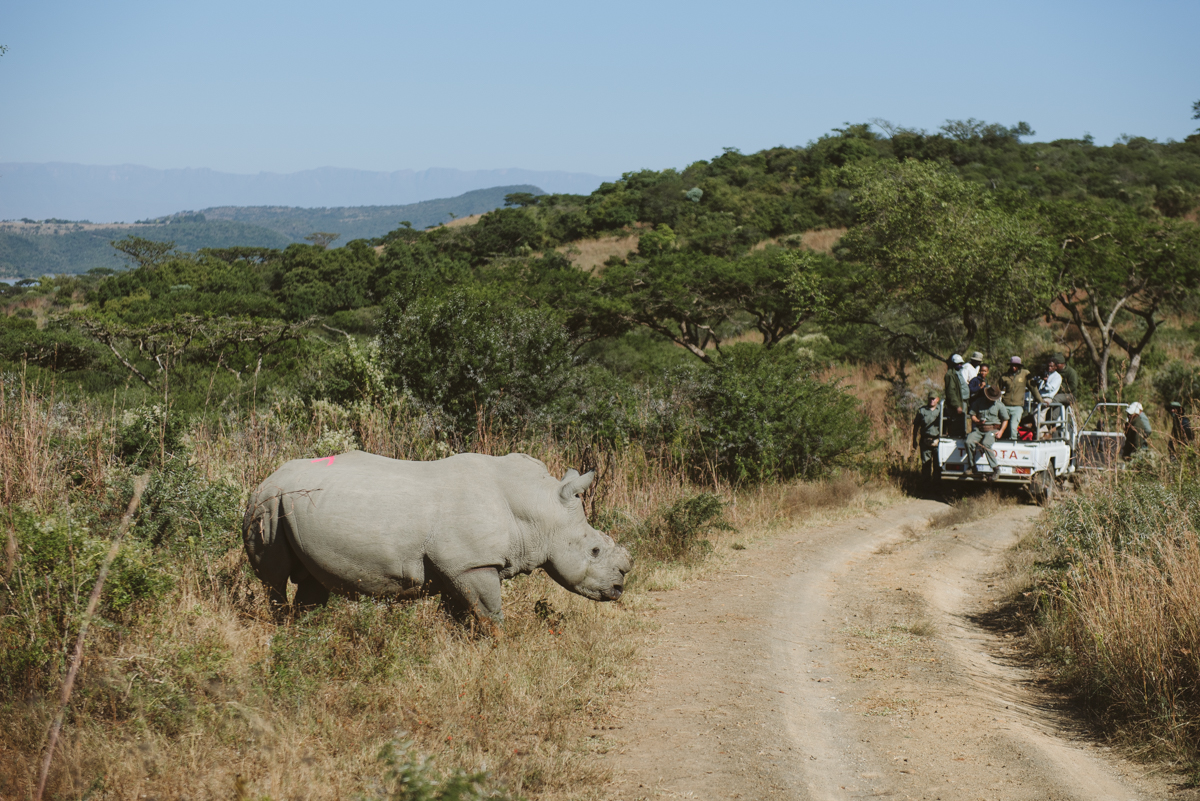 The demand for rhino horn is not decreasing and both black and white Rhino populations continue to decline across South Africa. It is imperative that we continue to raise awareness around the pressures our rhino populations and conservation teams face from poaching syndicates to drive much needed funding for dehorning initiatives such as this one.

Sending a team to document the dehorning operation meant we could prepare a press release with high quality images as soon as the process was completed to ensure as much coverage was achieved as possible. The story reached a worldwide audience and was published by a variety of online media including Mongabay in a feature “South African dehorning initiative aims for ‘zero poached’ white rhinos”  and made the front page of the Witness Newspaper. “It is a bittersweet feeling after an initiative such as this – the accomplishment of a highly successful operation, tainted by the unfortunate need to have to undertake such an invasive process due to the unnecessary demand for this animals’ keratinous horn. We hope, however, that Rhino dehorning is only an interim measure to safeguard populations such as these while work is continued in the education and demand reduction space.” – Mark Gerrard, Wildlife ACT Managing Director. 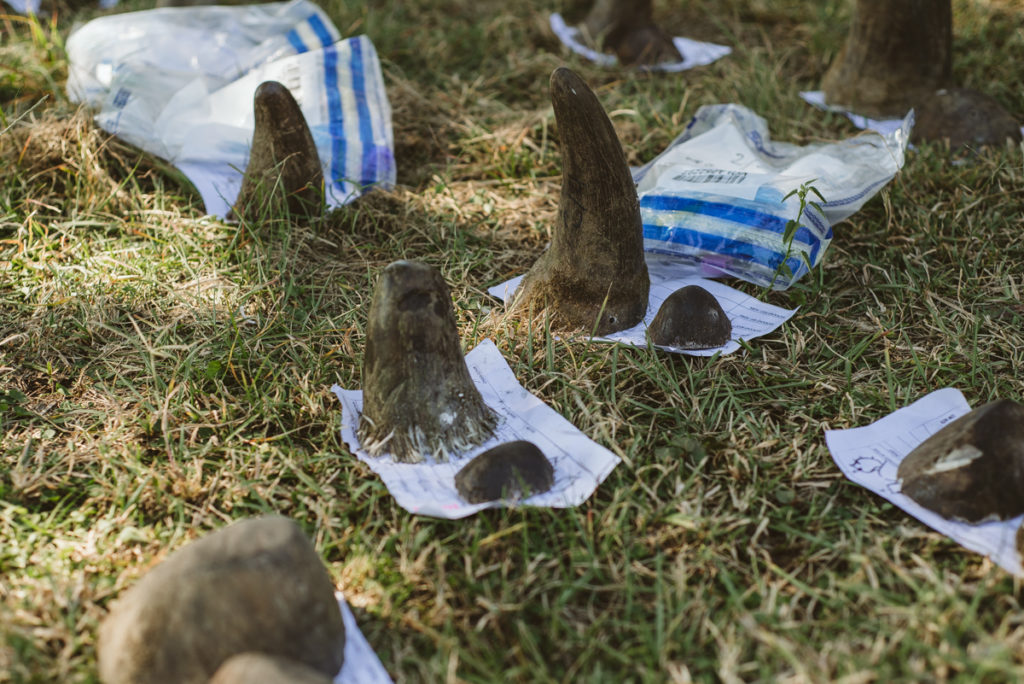 Authorities take the rhino horns to a secure location, where they’re either destroyed or stored in a high security vault. You have 30 seconds once the Rhino has been given the reversal to move away. All the shavings of keratin are collected along with the horn for the vault. 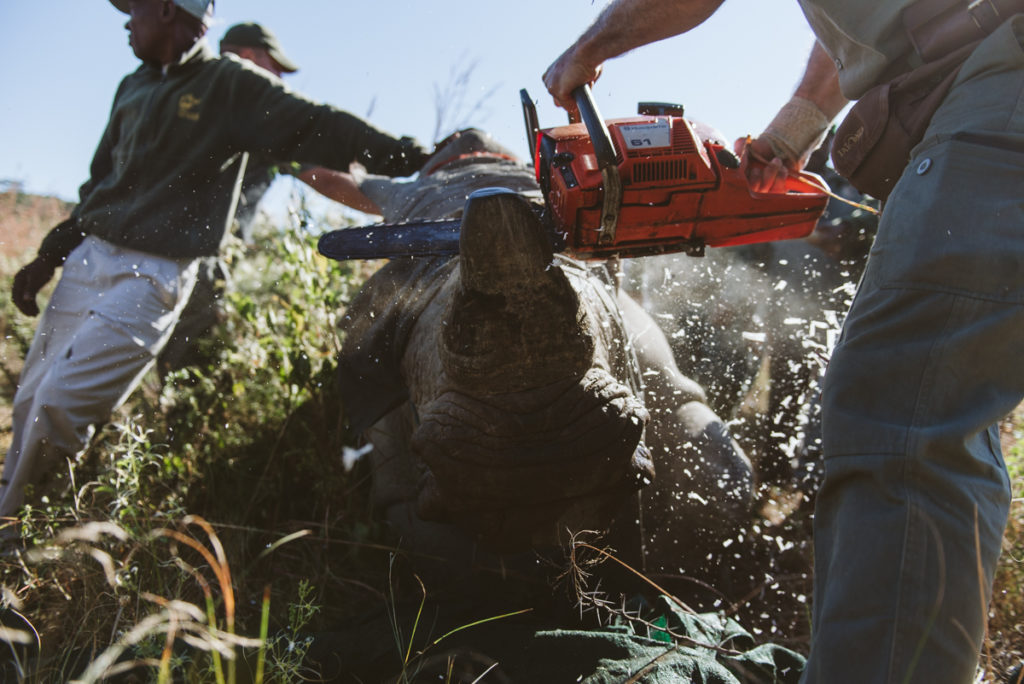 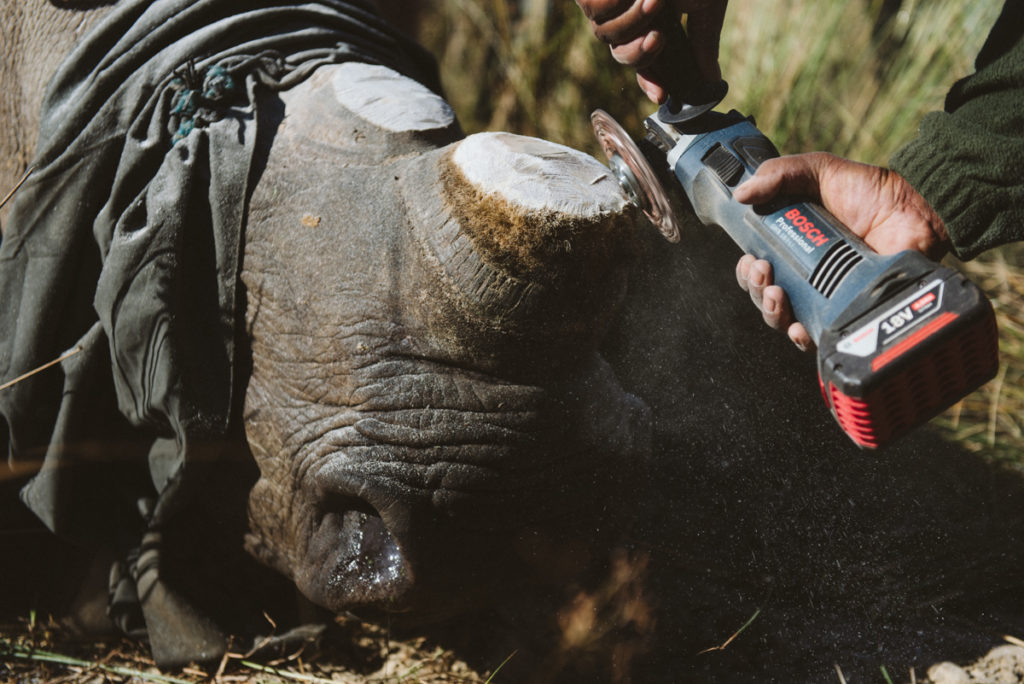 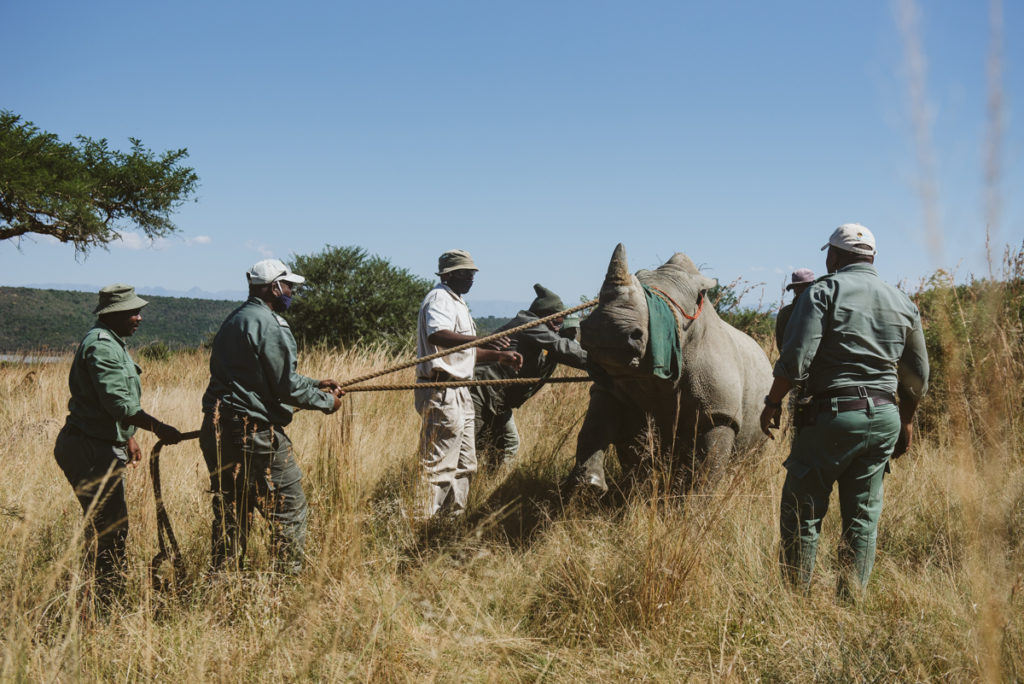 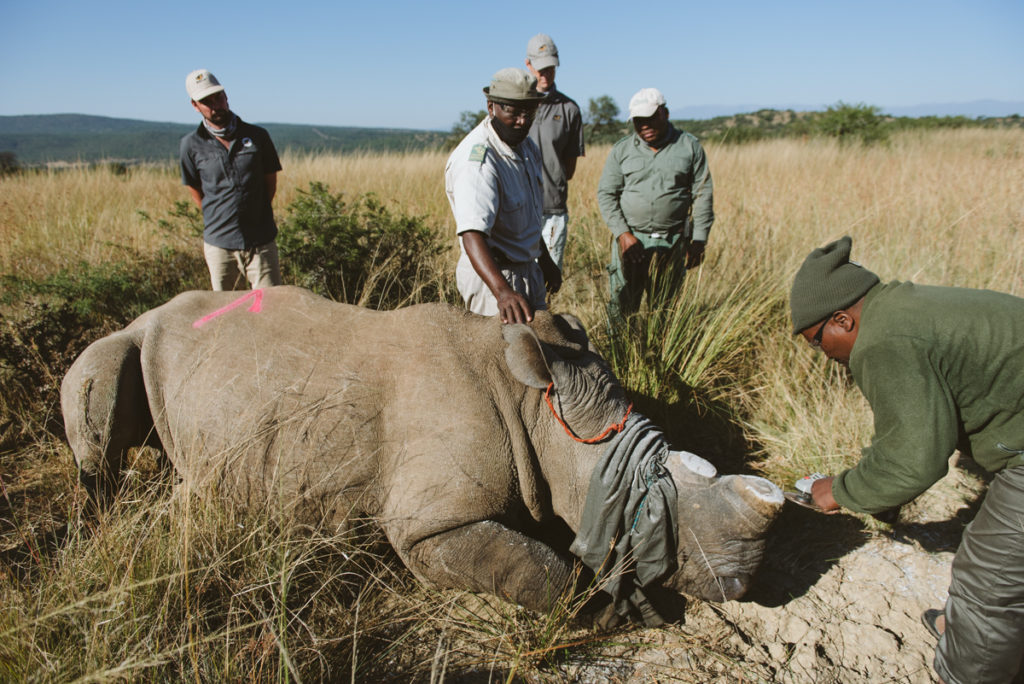 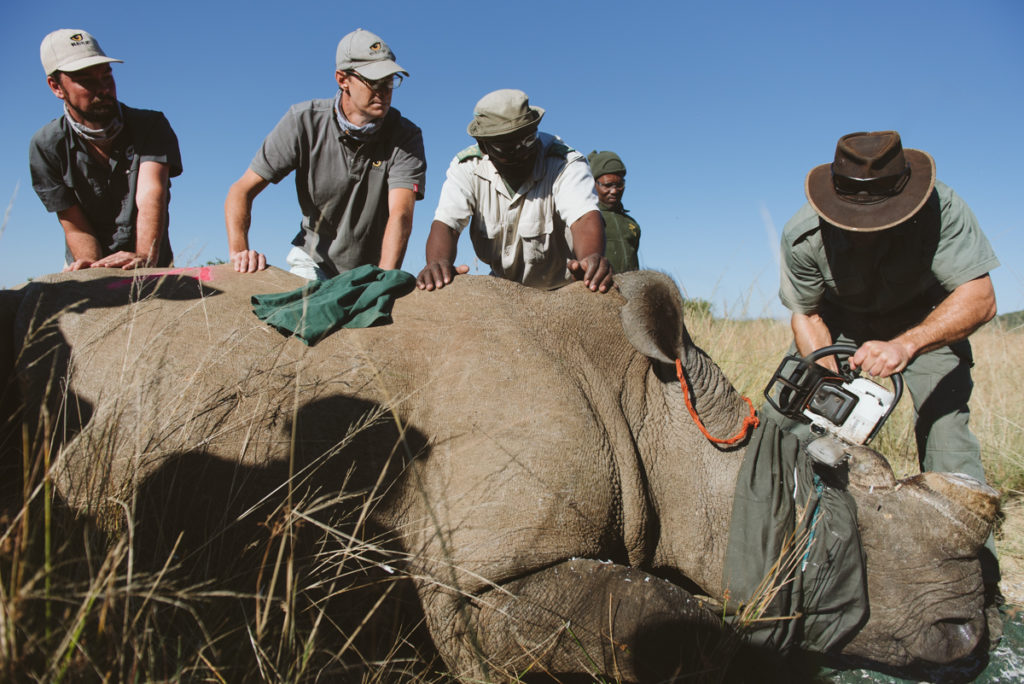 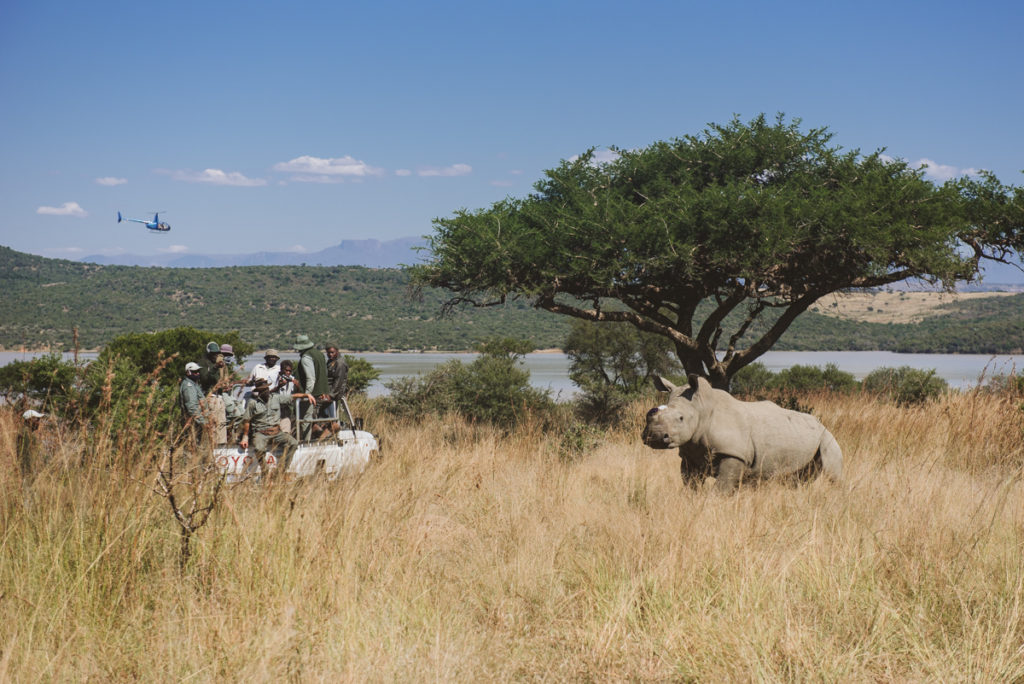 The team standing by to ensure the rhino wakes up and is comfortable before moving on swiftly to the next rhino.