RECUP – The reusable cup you never have to wash…

Coffee drinkers in South Africa can now join the war on plastic by eradicating single-cup use.

This new RECUP initiative is led by the Durban-based Charles Denison, who is blending his knowledge as a certified coffee expert to a deep commitment to reduce the damaging impact that plastic is having on the environment.  RECUP has an audacious goal to rid South Africa of single use coffee cups.

South Africa’s record of releasing plastic into the sea is abysmal. Out of the top 20 offenders in the world, Denison says, South Africa is 11th worst.

“We are even higher than India and Brazil on that list with 94% of all beach litter in South Africa made up of plastic.” Denison has been joined by friends Ryan Moore and Geoff Noble in this fight to reduce the use of plastic cups. “We have extensively researched the impact that a single cup of coffee could have on the environment. The results are astounding…and disturbing.”

The UK toss away 49 million cups every week while Germany use 320 000 containers every hour. According to Green Match, the world uses up to 16 billion disposable coffee cups each year. This represents the felling of 6.5 million trees, the use of 15 billion litres of water and enough energy to power 54 000 homes for a year. Significantly, Denison adds, 50% of consumer plastics are single-use. There has been a recent emphasis on reducing the use of plastic straws but Denison says that just one regular take-away coffee cup and lid equates to a whopping eight straws.  “So, while we are all having this big fight against straws, we should also be looking at take-away single-use coffee cups.”

Most “paper” coffee cups are lined with a 100% polyethylene (plastic) coating on the inside. This makes them waterproof, says Denison, but this plastic lining renders the cup non-recyclable in ordinary paper recycling. The result is that most coffee cups end up in a landfill.  Coffee cups have a useful life of 15 minutes, so while compostable and biodegradable are a move in the right direction, they still require huge amounts of energy to produce and transport for a single use, making reuse the preferred choice.

And so to Denison’s promotion of a revolutionary coffee cup deposit system to drastically reduce single-use cups, an initiative that is simple and affordable. A café customer pays a refundable R20 deposit for a reusable coffee cup. The cup can then be swopped for a clean one or returned for the R20 deposit at any partner café.

“RECUP essentially costs a customer nothing while the café saves approximately R1.40 for a single-use cup and lid and, more importantly, prevents another single-use item entering our landfills.”

Lids are for sale for R29, and for the customer to keep, so for less than R50, customers have a reusable, affordable option.

All participating providers can be found at any time on the RECUP app and these outlets are committed to recycling the containers at the end of their useful life.

Denison says in January RECUP launched a 20-store trial in Durban, including two corporate head offices, and are now rolling out in other cities and regions.  The national launch for RECUP occurred at the Cape Town Coffee Festival over the weekend.  Cities and municipalities can partner with RECUP to introduce the deposit system to their region with branding possible on the reusable lids.

The idea was born in Germany where two students introduced RECUP in 2016. Today, with government backing, the system now has a presence in over 20 German cities with over 2 400 outlets.  RECUP is taking Germany by storm, says Denison, with an average of four new café partner sign-ups per day, including fast-food giant McDonald’s McCafé.  The founders have received the prestigious Jane Goodall Award for making a difference to the environment. South Africa is the first region outside Germany to be issued with a RECUP partnership while Belgium, Ireland and Denmark have recently launched. RECUPs are made of 100% polypropylene (PP), which is tasteless, food-safe, BPA free and are extremely durable. They are also fully recyclable at the end of their life.

If we can start making a dent in the way we use plastic, says Denison, then we really should. 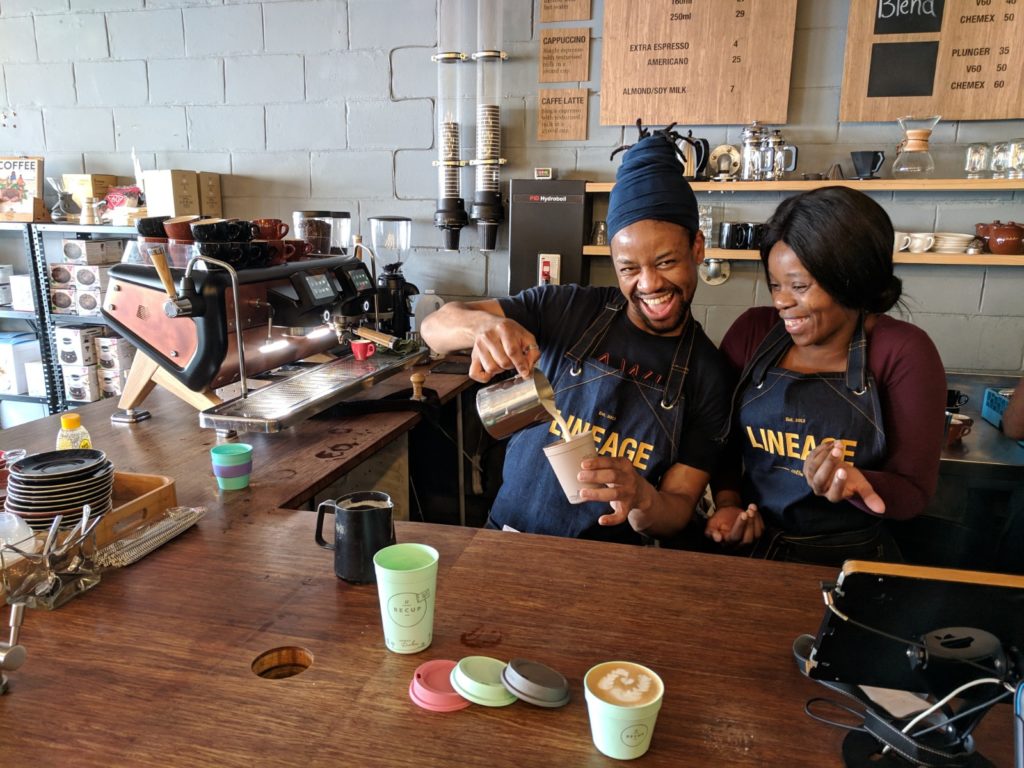