We went into 2021 not knowing what to expect… but looking back now, we can’t believe how much was achieved in collaboration with our partners and clients.

What started off as a year filled with uncertainty, ended with some moments that will stick with us for a lifetime.

Looking back motivates us as a team to keep pushing the boundaries for both us and our conservation and tourism partners, and by sharing the top 10 highlights, we hope we can inspire others to do the same. 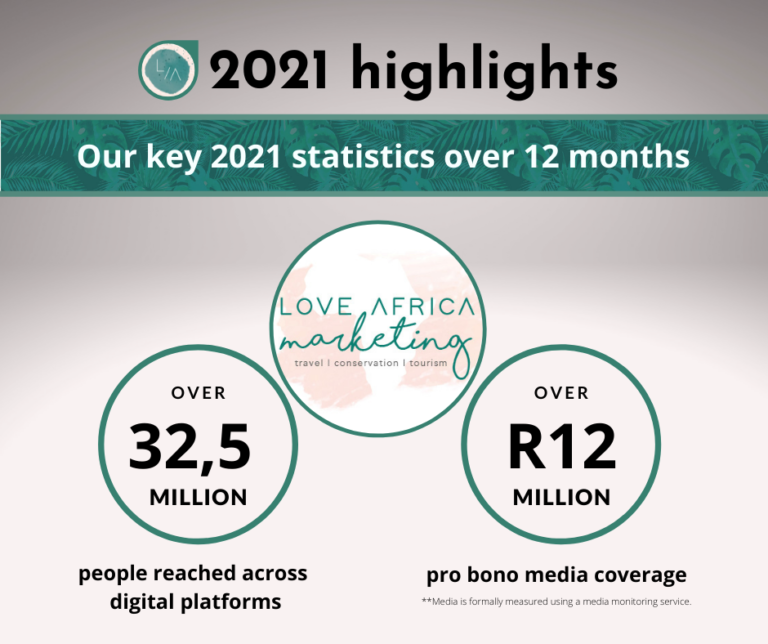 On 2nd May 2021, Love Africa, together with the Blood Lions team, witnessed one of the most significant environmental wins in our career, after 8 years of campaigning for us and many more for others.

On this day, DFFE Minister Creecy announced that South Africa would no longer breed captive lions, keep lions in captivity, or use captive lions or their derivatives commercially. She instructed her Department to put processes in place to halt:

‘The Blood Lions film and global campaign was launched in 2015 and has worked tirelessly to end this cruel and unethical industry and its spin-off activities. This announcement by Minister Barbara Creecy is highly significant and we commend the Minister in her decisive leadership in bringing an end to the commercial captive lion breeding industry. The Blood Lions team welcome the chance to play a role in assisting her, the various Departments and entities in the phasing out process to come.’

Our team assisted with the build up and live coverage of the 2021 Rhino Peak Challenge. This year was a special one, as not only did the 44 Ambassadors conquer the challenge of summiting the iconic Rhino Peak, they also managed to raise over R1 million for Endangered Wildlife Trust, Wildlife ACT – Focused Conservation and Ezemvelo KZN Wildlife.

These much needed funds go towards protecting endangered species such as the bearded vulture, which is on the brink of extinction.

3. Listen to the Ocean Campaign with Ocean iMPAct

Once again, we worked with Lauren and her team at WILDTRUST – long term partners of ours, for another national campaign on Ocean iMPAct.

The #ListenToTheOcean campaign was a call from the youth to President Cyril Ramaphosa, as well as the public to take action for South Africa to contribute our lion’s share to the global 30 x 30 goal.

The campaign caught the attention of the media, and resulted in a live interview with the youth on the SABC’s Expresso Morning Show which reached a further 8 million people alone. 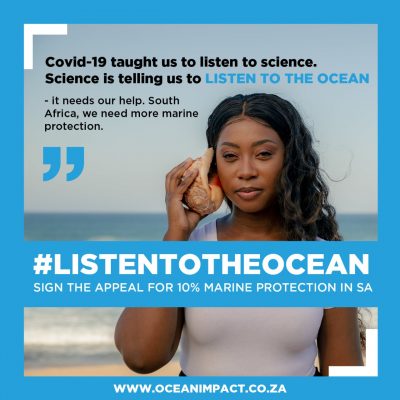 As an environmental communications company working with grassroots organisations, being able to witness, document and create awareness for the impressive conservation work happening on the ground reminds us of why we do what we do. 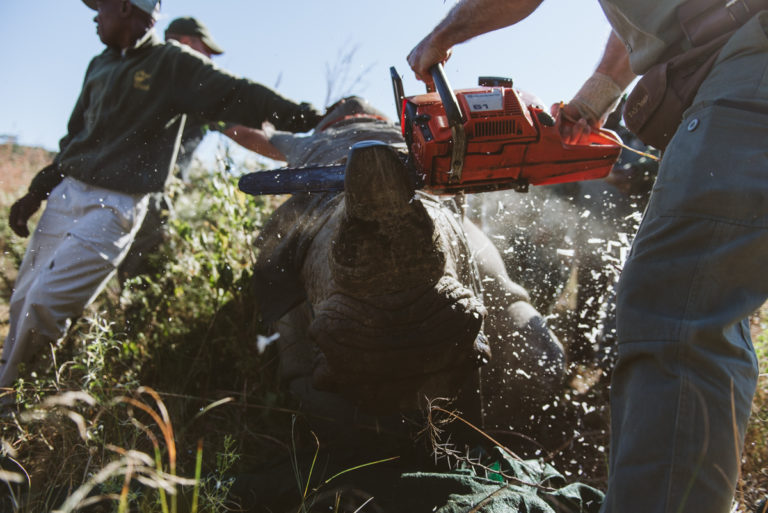 Our team joined Wildlife ACT – Focused Conservation and Ezemvelo KZN Wildlife to document one of the biggest Rhino dehorning operations in KwaZulu-Natal that took place at the Spioenkop Nature Reserve. The Ezemvelo KZN Wildlife game capture team, funded and supported by Wildlife ACT,  worked together to successfully dart and dehorn the entire Rhino population over the three day operation.

The dehorning of Rhino populations has been adopted as an effective tool in the fight to save the species from increasing poaching threats. Although not a solution on its own, dehorning has proven effective when used in small populations and in conjunction with a number of other initiatives, including strong law enforcement.

“It is a bittersweet feeling after an initiative such as this – the accomplishment of a highly successful operation, tainted by the unfortunate need to have to undertake such an invasive process due to the unnecessary demand for this animals’ keratinous horn. We hope, however, that this is only an interim measure to safeguard populations such as these while work is continued in the education and demand reduction space.” – Mark Gerrard, Wildlife ACT Managing Director.

Full story and images on the link below:

The iconic Hluhluwe-iMfolozi Park, with the support of Wildlife ACT, released a new pack of Endangered African Painted Dogs into their new home.

This is an important milestone in the conservation of this species as they are the most endangered carnivore in Southern Africa, with an estimated 3000-5000 individuals left in the wild, of which only ~550 individuals are found in South Africa.

We are proud to have had our team join these dedicated organizations to document and release this good news story.

WATCH the clip that we produced for this release:

Love Africa is proud to be working with the World Wildlife Fund (WWF) in running the communications for the newly launched African Nature-Based Tourism Platform – a project facilitating access to COVID-19 relief and recovery funding for communities, nature-based tourism enterprises, and conservation areas in southern and eastern Africa.

You can visit the different social platforms launched in 2021 here:

Love Africa was proud to work with Destination Livingstone on a 4 month online domestic tourism campaign aimed at creating awareness for the iconic city of Livingstone, Zambia.

Part of our mandate was to create national awareness and interest in Livingstone as a local destination within Zambia; to tackle any misperceptions of Livingstone within the domestic market; to reduce the barrier to entry for travel and finally to increase tourism numbers to Livingstone. With this in mind, we launched the “Mosi Oa Tunya” campaign.

The campaign name means smoke that thunders: a strong local phrase that represents one of the most iconic features in Zambia  – Victoria Falls, and encourages locals to “feel”, “see” and “experience” the thunder.

The national tourism campaign resulted in the following online statistics and results:

Campaigns such as the Mosi Oa Tunya campaign are key destination marketing tools that are guaranteed to peak engagement and awareness.

Chat to us about developing your own unique destination marketing campaign. >> Get In Touch

In August 2021 we assisted 350.org Africa in a campaign aimed to create public awareness around the controversial deal South Africa was signing with Karpowerships.

The campaign spanned over one month and involved drafting content for social media, writing emailers and creating an impactful graphic which was printed out and used at their protests outside the Development Bank of South Africa. 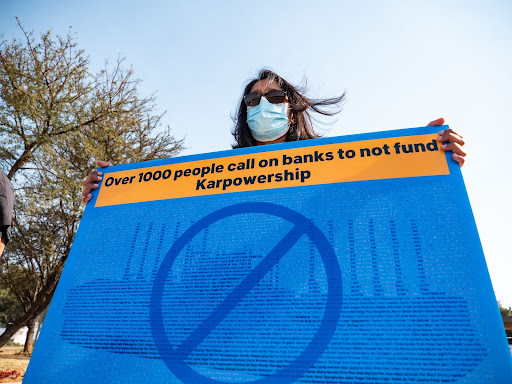 8. Launching ALL RISE – Attorneys for Climate and Environmental Justice

Love Africa assisted in the marketing strategy and launch for ALL RISE, a non-profit organisation and registered law clinic for climate and environmental justice located in KwaZulu Natal, South Africa. It was a privilege to be approached by this passionate and dedicated team to put together a launch and marketing strategy for their powerful law clinic in South Africa.

This all-woman team consists of passionate and experienced attorneys working pro bono on environmental matters in the public interest, for people who cannot afford legal services. ALL RISE attorneys work towards providing justice for all and help protect the planet for current and future generations.’

Check them out and see how you can play your part as a member of the public in driving change for the environment in South Africa.

One of our placements in the media: https://www.timeslive.co.za/sunday-times-daily/news/2021-06-13-people-or-wildlife-legal-eagles-spread-their-wings-to-cover-both/?fbclid=IwAR1trCrLpo8o6JI751OtclPTwZJYaoObtWZCw3Fj1BeGjQ2y9QfqDKEfCiQ

We had the incredible opportunity to work with Conservation Outcomes in filming and producing a series of online modules for their Biodiversity Stewardship Training for the South African National Biodiversity Institute.

‘Biodiversity stewardship is an approach to securing land in biodiversity priority areas through entering into agreements with private and communal landowners, led by conservation authorities, with NGOs often playing a key supporting role.’ – Conservation Outcomes

It was an inspiring two months exploring and documenting these sites around South Africa, and conducting interviews to capture the essence of Biodiversity Stewardship and Protected Area Expansion in South Africa.

And what an absolute pleasure to work with Kevin, Greg, Steve and other members of the CO team on this project.

In August 2021, Love Africa led the communications with the youth group #YouthForMPAs, for the African Youth Summit – the first of its kind on our continent aimed at fostering ownership and stewardship of the global Marine Protected Area agenda among African youth.

The goal of the online summit was for the youth to raise their voices for the ocean, to bring about change, to share knowledge, and to build a better tomorrow through Marine Protected Areas.

We had almost 1 000 youth from across Africa signing up in less than a month to attend the summit. Overall, we reached more than 430 000 across the social platforms, and more than 2.6 million people through unpaid traditional media.

Have a look at our favourite 10 images from last year taken by our in-house photographer, Casey Pratt.

We are really looking forward to sharing the result of the project that took us to Hluhluwe iMfolozi Park, the Kruger National Park and Cape Point Nature Reserve in 2021 and sharing stories from the conservation heroes we met along the way and the issues and challenges they face while protecting our wildlife.